March 31, 2015
After updating to the recently released build #10041 of the Windows 10 Techincal Preview, I found that Windows Update wasn't working for me.  The old style Windows Update was no longer available from the Control Panel.  The new Windows Update in the modern "Settings" app showed that I had no updates available, and last checked for updates on 2/2/2015.  If I clicked the Check Updates button, nothing seemed to happen, or occasionally the "last checked" date would flicker briefly, but not change.

This PC is a member of a domain, with an active System Center Configuration Manager 2012R2 server.  As such, it would normally get it's updates from the SCCM server (which in turn pulls them through the associated WSUS server.)  However, SCCM doesn't offer updates for the Technical Preview, so that isn't an option when running a preview build of Windows 10.

I found that to get Windows Update working, I had to change the policy setting which points my workstation to the configmgr server for updates.  The easiest way to do this in a one-off situation like this is to edit the local policy.

Open the start menu, and type "gpedit.msc" and press enter.  This should launch the Local Group Policy Editor.  In the left pane, expand "Computer Configuration\Administrative Templates\Windows Components" and select the "Windows Update" folder.  In the right pane, look for any settings with a State other than "Not configured".  The important one here is "Specify intranet Microsoft update service location".  If this setting is enabled, Windows will check the specified server for updates, instead of Microsoft's internet based update servers.  Double click on this setting, and change it to Disabled.  (This setting should automatically revert back to the previous setting after a period of time, but you may want to make a note of it before you make the change, just to be safe.) 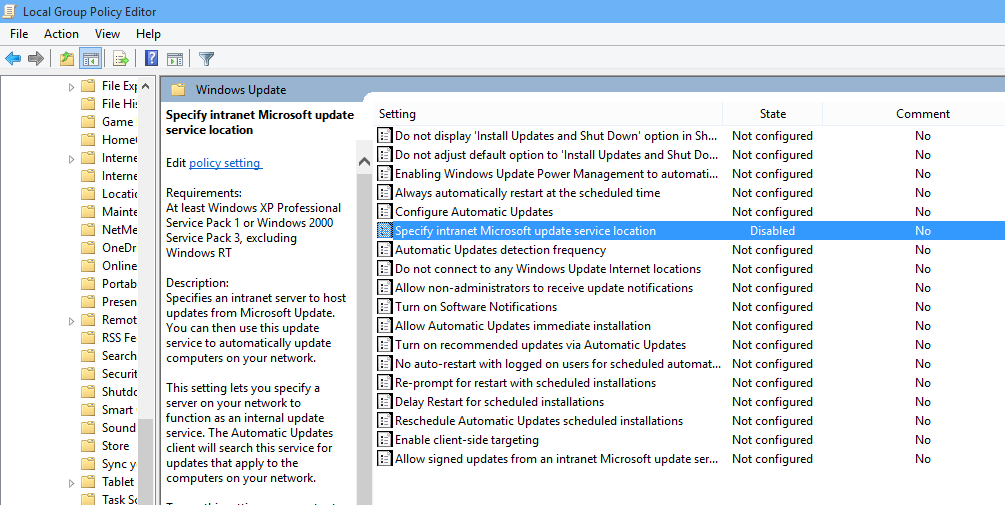 After disabling this setting, apply the changes and click ok.  Wait a moment or two, then open the modern "Settings" app again.  Select "Update & Recovery", and click the "Check for Updates" button.  The "last checked" info should disappear, and be replaced with a message that it is checking for updates.  After a few minutes, some updates should be available.  (I believe to date there have been 4 windows updates released for build 10041.  In my case, I also had a few driver updates available which had been released in the past week or so.)

This change will also allow the computer to check for new builds of the Windows 10 Technical preview, including the just released build 10049. 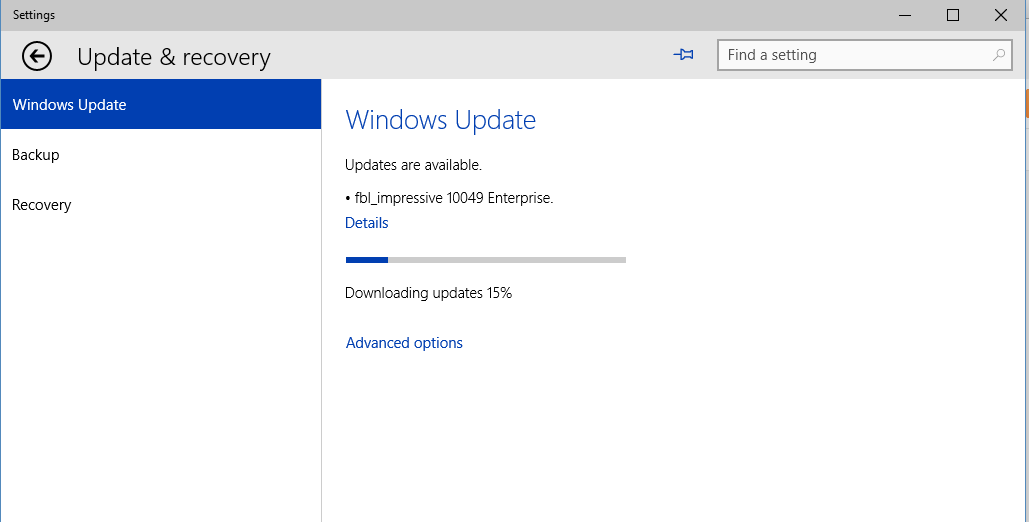 Popular posts from this blog

August 17, 2016
Recently, I ran into an issue with computers running windows 10 that would not connect to our WPA2-Enterprise encrypted wifi network.  When it failed to connect, there was no indication of why, only the message "Can't connect to this network."  The computers were able to connect to unencrypted networks and networks using a Pre-shared key for WPA encryption without issue. Checking the event logs on the RADIUS server to see why the comptuer failed to connect, there was no log entry for a connection attempt from the affected system.  The WLAN-Auto-Config log on the client listed a couple of errors, including Event ID 11006 and 12013, but other than showing that the failure reason was "Explicit EAP failure received", they didn't give much to go on: Log Name:      Microsoft-Windows-WLAN-AutoConfig/Operational Source:        Microsoft-Windows-WLAN-AutoConfig Date:          8/15/2016 1:11:20 PM Event ID:      11006 Task Category: MsmSecurity Level:         Err
Read more

Mystery Solved: Bitlocker is enabled, but Intune shows the computer as non-compliant for Require Bitlocker

February 25, 2019
For some time, I have struggled to understand why Intune reports some computers as non-compliant with the "Require Bitlocker" setting, even though Bitlocker is enabled and working on the computer.  In my searches for an explanation, I found the same question asked by many others, but never an answer.  Until today. I accidentally stumbled across this article from Microsoft's Rob Lane , which explains how the Require Bitlocker setting is evaluated and why it might seem to incorrectly report a non-compliant state.  I encourage you to check out that article for full details.  I'll just summarize here the part that suddenly made this bitlocker compliance issue make sense to me. The "Require Bitlocker" setting in Intune relies on the Device Health Attestation (DHA) service in Windows 10 to report the state of Bitlocker encryption on the computer.  If Bitlocker protection is disabled or suspended, DHA will report that the computer is non-compliant with this
Read more

Error mounting ISO file - "Sorry, there was a problem mounting the file"

October 31, 2017
Recently, I've had problems using the built in functionality of Windows Explorer to mount ISO files as a virtual DVD drive.  When I tried to mount an iso, there was a long delay with the 'wait' cursor, and eventually I got an error dialog which said simply "Sorry, there was a problem mounting the file."  Subsequent attempts to mount an iso file (whether the same file or a different file) would immediately return the error, without delay.   I searched far and wide online and could not find a solution that applied in my environment.  Eventually, I tried mounting the iso using the "Mount-DiskImage" powershell command in hopes of getting a more informative error message.  The error I got was: Mount-DiskImage : A virtual disk support provider for the specified file was not found.  Searching for that error message lead me to posts about problems installing a device driver.  Then, everything clicked... Some time ago, we implemented some Device In
Read more

Also find me at: